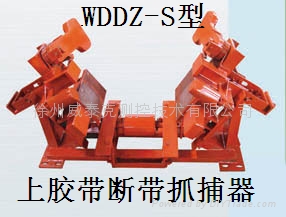 Belt arresters for belt conveyors: The belt grabber for the belt conveyor is divided into the belt breaker (type WDDZ-S) and the lower belt breaker (type WDDZ-X). Normally used as a roller, when the belt break or reverse stop failure, can quickly catch the tape suddenly sliding heavy, empty tape, and has the function of preventing tape deviation, can be used as a belt holder when needed. Mainly suitable for upward transport belt conveyor, especially for large inclination, large volume, long distance up the mountain strong type or ordinary type belt conveyor. Belt breaker (Type WDDZ-S): When the belt conveyor is in normal operation, the upper and lower brake blocks and the suspended reversible stop rollers of the broken belt catch are not in contact with the belt. When the broken belt occurs, the belt carrying the material sags and slips, which is pressed on the suspension reversible stop roller of the broken belt catch and the lower brake plane brake block of the left and right sides, so that it moves up quickly along the wedge track, gradually reduces the distance between the upper and lower brake blocks, and finally catches the sliding belt and clamps. lower tape breaker (type WDDZ-X): belt conveyor in normal operation, the lower belt and lower gate block and eccentric roll do not contact. When the belt break occurs, the force of the power arm installed under the upper tape decreases, driving the mechanism composed of connecting rod, spring and column pin to release the eccentric roll quickly. Because the eccentric roll tape runs in the same direction, the gap between the lower brake block and the eccentric roll is gradually reduced, and the tape is quickly captured. Performance characteristics: The left and right sides of WDDZ series belt breaker are 400 mm*160mm upper and lower brake blocks, middle suspension reversible stop rollers. When the belt breaks, the upper and lower gate blocks on the left and right sides of the belt and the suspended reversible stop roller synchronously catch the belt, the force is uniform, the braking distance is short, and the tear belt will not be caused. After the installation and commissioning of WDDZ series belt break belt arresters, the upper and lower brake blocks and the suspension reversible stop rollers on the left and right sides of the belt are not in contact with the running belt, and the service life is long, so there is no operating maintenance cost. When there is a large coal block and gangue passing on the running belt, the brake arm can rotate flexibly so that the large gangue and coal block pass through, and reset automatically. The upper brake block can be adjusted horizontally and longitudinally along the belt to suit the different width of the coal-free belt on the edge of both sides of the belt in the field. The multi-point arrangement along the line is adopted to adapt to the random change of the belt break point, which has the functions of preventing running deviation, failure of the reverse stop device and alarm of the break belt. Scope of use: Belt conveyor with 500~2000 mm bandwidth; rigid frame or hanging conveyor; belt conveyor with 6° inclination; suitable for various groove type roller groove angle 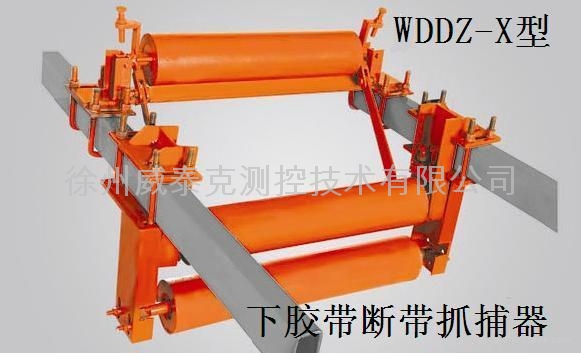 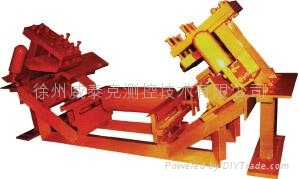