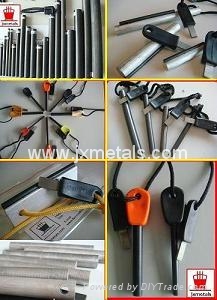 Artificial Flints are made from sparking alloy of composed mostly rare earth metals (or Cerium Mischmetal with Iron, Magnesium & other metals, whose low ignition temperatures (150 to 180°C) are the chemical origin of its easy sparking. When sparked the metals will burn in excess of 3000°C (5000°F), which is easily hot enough to ignite tinder such as cotton wool, tinder paper, certain tree barks and chemical such as petrol, magnesium and the gas from camping stoves. Ferrocerium is traditionally used, the "flint" in lighters and its ability to give a shower of hot sparks when scraped against a rough surface (pyrophoricity)  are widely used in flint Lighter, magnesium firestarter, outdoor fire starter, sparking entertainment, clockwork toys and strikers for welding torches.

The usual operation method is :
While ferrocerium-and-steel function in a similar way to flint-and-steel in fire starting, ferrocerium actually takes on the role that steel played in traditional methods. When small shavings of it are removed quickly enough, the heat generated by friction is enough to ignite those shavings. The sparks generated are in fact tiny pieces of burning metal. the Ferrocerium rod is the leading actor of the Swedish FireSteel, Fire Stick Flint (Basic), Fire Stick Flint (Deluxe), Magnesium Striker Fire Flints and the Ranger Fire Flint, which is well-known brand name for the outdoor survival gear.

Application :  It is used as the firestarters or fire starter in scouting and camping, sparking entertainment, clockwork toys, strikers for welding torches, etc., it is the best compact firestarter we can easily use, plus its dependability,made it a favorite of survival experts, hunters, fishermen and campers. It works equally well when wet or dry. Swedish Fire Steel has even found its way into cabins and backyards as a fool-proof way to light stoves and gas-barbecues.

Operation :  You can get a bare rod or ferrocerium blanks and roll some tape on as a handle, that will give you twice as much ferro to work with and may save a little room as well. You simply pull your knife blade or striker slowly and firmly down the length of the ferrocerium rod, and sparks easily ignite a stove, barbecue, paper, dry grass bark, tinder, this iron rod is water resistant, and its 3000° C spark works well even when conditions are wet, cold, and less than optimal. this ferro cerium flint fire starter is a favorite of survival experts, hunters, fishermen, backpackers, campers and boy scouts, etc.,  Also the ferrocerium rod can be inserted into one side of Magnesium block to build a Magnesium Ferrocerium Firestarter, etc.,