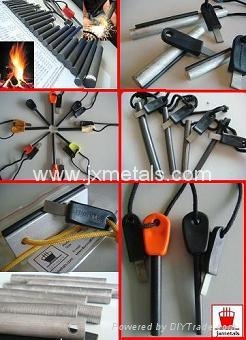 Ferro-cerium rod is made from Iron, Magnesium and mostly of an alloy of rare earth metals called mischmetal, which contains cerium, lanthanum and a small amounts of neodymium and praseodymium. The origin of its easy sparking is cerium's low temperature pyrophoricity, it's ignition temperature occurring between (150 to 180 degrees celsius). Since smaller scrapings become better sparks, the mechanical properties of rare earth metals must be adjusted to give a usable material; to that end, at least two strategies have been developed to make such pyrophoric alloy more brittle:

# Oxide - most contemporary flints are hardened with 20% iron oxide and 2% magnesium oxide.

# Intermetallic - in the Baron von Welsbach's original alloy,    30% iron (ferrum) was added to purified cerium, hence the name "ferro-cerium". Iron reacts with rare earth metals to form hard intermetallic compounds similar to those in neodymium magnets; such magnets are also known to generate sparks quite easily when broken.

Ferrocerium is also known as Auermetall after its inventor Baron Carl Auer von Welsbach, it is sold under such trade names as Blastmatch, FireSteel, and Metal-Match.

While ferrocerium-and-steel function in a similar way to flint-and-steel in fire starting, ferrocerium actually takes on the role that steel played in traditional methods. When small shavings of it are removed quickly enough, the heat generated by friction is enough to ignite those shavings. The sparks generated are in fact tiny pieces of burning metal.

Application :It is used as the firestarters or fire starter in scouting and camping, sparking entertainment, clockwork toys, strikers for welding torches, etc., it is the best compact firestarter we can easily use, plus its dependability,made it a favorite of survival experts, hunters, fishermen and campers. It works equally well when wet or dry. Swedish Fire Steel has even found its way into cabins and backyards as a fool-proof way to light stoves and gas-barbecues.

Operation :  You can get a bare rod or ferrocerium blanks and roll some tape on as a handle, that will give you twice as much ferro to work with and may save a little room as well. You simply pull your knife blade or striker slowly and firmly down the length of the ferrocerium rod, and sparks easily ignite a stove, barbecue, paper, dry grass bark, tinder, this iron rod is water resistant, and its 3000° C spark works well even when conditions are wet, cold, and less than optimal. this ferro cerium flint fire starter is a favorite of survival experts, hunters, fishermen, backpackers, campers and boy scouts, etc.,  Also the ferrocerium rod can be inserted into one side of Magnesium block to build a Magnesium Ferrocerium Firestarter, etc.,